I Think His Forklift's Sexy

THE BACKGROUND:
A few weeks ago Boeing held a Forklift Rodeo.  Spencer--a desk jockey for the past three years--was coerced by his co-workers to go out and compete.  When the results were in, he was the 3rd place winner. 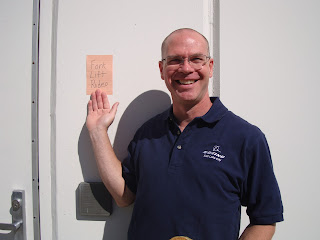 We went to Usana for the state Forklift Rodeo.  You can see from the signage that this was a HUGE event.  (There were nearly 50 participants from companies like Squire-CocaCola, Usana, ProLogistics, 3M, Firestone, Morton Salt, etc., and this was the 8th annual Forklift Rodeo sponsored by the Utah Manufacturers Association.  WHERE HAVE YOU BEEN?  Sheesh!) 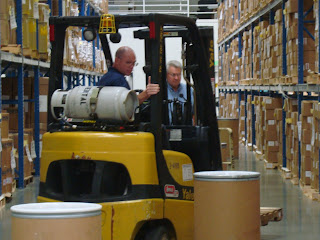 The obstacle course:  Spencer lost one point on this for having to back up in order to line up with the pallet he needed to pull off the shelf.  This picture is during the second half, when he had to BACK through the course. 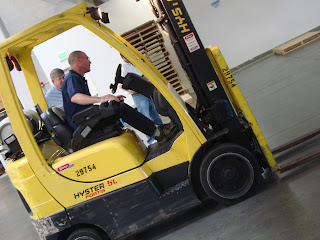 Dock loading:  Spencer did this one flawlessly.  One of the judges sidled up to the other and said, "He's really close to the side--did he hit it?"  The man replied, "Nope!  He's just good." 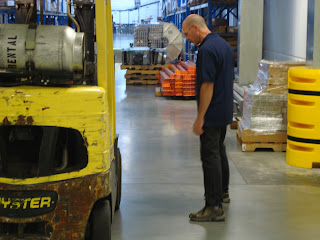 Forklift inspections:  The participants had to inspect a forklift for safety conditions, calling out what they were doing as they went.  Spencer also did this one flawlessly.


THE RESULTS ARE POSTED: 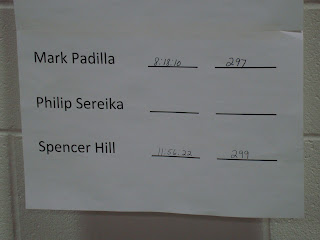 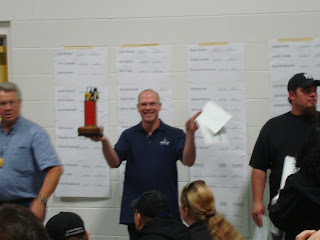 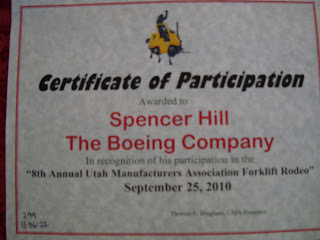 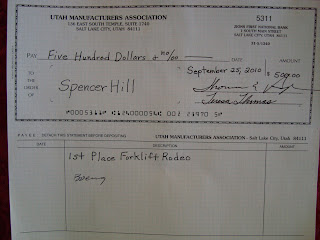 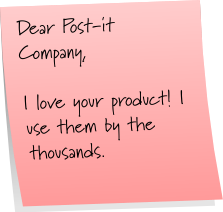 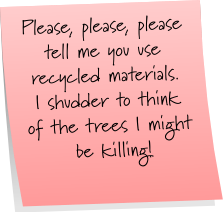 Now that the kids are back in school, it might be a good time to tell you that Spencer checked his GPA for the 1-year course he just completed.

He is totally awesome, wonderful, amazing, and everything nice.

He Said, She Said

He said:  I need to--WE need to get this presentation done by this afternoon.

She said:  Let me know when you've picked up the signature sheets and made the copies.

He said:  I need a PowerPoint right away.

She said:  Let's get together and do these travel requests.

He said:  I want you to screen the applicants for me.

She said:  Would you be able to cover the phones during this time?

He said:  When you contact this person, you only need to send the one document.

He said:  This needs to be booked for that date, and you need to decide on the food.

(Each of these was a different he or she.)

I'm a blog-stalker--did you know?  My blog-buddy, Noelle, always puts random, funny, poignant things on her blog, and I wonder:  WHERE DOES SHE COME UP WITH THIS STUFF?

And then I remember the weird things that go through my mind.  Like this, which came to me while I was braiding Ashtyn's hair yesterday:

My mom learned to crochet when I was 5 years old.  Her first project was a tablecloth, which won a blue ribbon at the fair (no joke!).  By the time I was 6, it was fairly common to see Mama sitting with her crocheting.  Before I finally asked her to teach me, I played with a  lot of yarn.

One day I was playing with three strands.  And I braided them.  And I was so proud of myself for coming up with this amazing thing!  So I went to my mom to show her what I had discovered.  Only she was completely blasee (sp?) about it, and said, "Yeah, that's called braiding."

What a letdown.  And then I thought, "Cool!  Nobody had to show me how to do this braiding thing!  I figured it out all on my own!  I. Am. Awesome."  (Okay, I probably didn't think OR say Awesome, because that word didn't enter my vocabulary till the 1980's--but you get the gist.)

And then I braided many, many long strands of yard, which I glued to a tennis ball.  It was a doll, see? 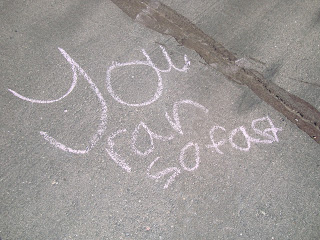 I don't know why my last post has those two extra pictures at the top.  I've tried to get rid of them, but then I lose other stuff, so they are stuck there.

I just wanted you to know.

It's sad, though, n'est-ce pas?  Because it ruins the effect of the latter part of the post. 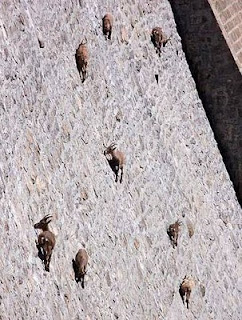 My fantastic "work" water bottle that Deb got me at the beginning of the year is leaking profusely.  That's just rude.

BUT my new job is going very, very well.  I was so busy on Tuesday that I could hardly breathe.  Let's celebrate!

My hair does not look as cute now as it did before I left for work on this windy morning.  But it is short.  You can't have everything, but it's good to get something.  :)

My home teacher (who works for a large vendor that our company uses) just stopped me to say hello.  Wasn't that kind?

Tummy Aches Are a Headache

On our way home from California, Ashtyn wasn't feeling well.  With her, we always figure she got some milk.  But then yesterday Spencer had to leave work early due to tummy ache, which also included fever and exhaustion.

Is Ashtyn sick due to milk or some bug?  I don't know.  And I don't know whether I should force her to go to school or not.

This morning I started having pretty major tummy rumblings.  So far I'm not having fever hot flashes/cold chills.  I hope I don't!

We spent the Labor Day weekend in the Sacramento area.  We rented a van, and we pulled out very early in the morning.  The van had a DVD player, so after we slept for a couple of hours, the kids chose videos to watch.  Fastest drive to Sacramento EVER!

We went to Dillon Beach for our official Hilladay on Saturday.  The weather in Sac was forecast to be perfectly HOT, so we hoped that that would extend to the coast.  About 2 miles inland, it was gorgeous; but on the beach it was windy and cold.  That didn't stop us from playing, of course.  I'll post some pix later.

Sunday we went to Sacrament Meeting, where we were greeted warmly by many.  We didn't know any of them, and they did not know us.  So when we would introduce ourselves as Fishes (me, anyway), there were mostly raised eyebrows.  One brother even said, "I have known the Fishes for 20 years, and I didn't know they had an older daughter."  I get that a lot.  That's what happens when you leave the nest first, I guess.

After Sacrament Meeting we went to Apple Hill.  It was opening day, and the weather was gorgeous.  I LOVE the smells up there!  It's too bad we don't drink, too, because all the vineyards were having tasting days.  I think wine looks beautiful, but the smell is awful!

The first thing we did at Apple Hill was buy a caramel apple.  Very, very disappointing!  Later in the day we bought a pie to take home--it, too, was pretty average.  What a bummer.  But there were some fun boutiques, and we each chose a piece of fruit to snack on.  I brought home Asian Pears for my bosses at work.  And some for us, too!

Our drive home also went really fast.  Literally.  We made it home in 9.5 hours.  We didn't ever go more than 82 mph, but we also didn't really make any stops.  We got gas in Reno, then drove through a fast-food place for breakfast.  Lunch was just snacks in the car, and we made one quick potty break at a rest stop.  So we sailed on through!

We found everything good at home.  Brant and Laurie have painted the basement, and it really looks fantastic.  They have a home now!  We are going to go halfs with them on a storage unit, so I hope our house will be cleaned up very soon, too.

Yesterday at work they made some announcements regarding changes in the Physical Facilities Department.  I have not had such a crazy day in a long, long time.  I loved it!  Except there wasn't time to use the bathroom or eat--so I was extra glad to go home.  Today's been a bit quieter (on my end), and I've been able to get a few things done.

Ashie stayed home sick from school yesterday.  She still wasn't great today, but she couldn't miss today's classes.  I hope by tomorrow she'll be 100% better.  Ugh.  It gets so old!

We sold our car yesterday, and Spencer is on the hunt for another car.  It's better that he change cars than homes, I guess, but I swear we hold a record for the most vehicles owned.  :)  In the meantime, I am carless.  So I rode halfway to the school with Tay and Ash (and the others they pick up for seminary), and they dropped me at the bus stop.

I didn't have time to get my hair cut last week, so today is the day for that.  Woot!  I need it badly!

That's our exciting life.  OK, so it's not that exciting.  But it's full and it's rich and it's happy.

I hope you are, too!

1.  Our beautiful Jax may be a mommy for the second time (she was scheduled for induction yesterday, I think).
2.  I get to go get a haircut today.
3.  Today--TODAY!!!--is Spencer and Briana's LAST day of school.
4.  We are leaving on Friday morning for Sacramento.