Not Even FIVE Years

In 2007 I stopped teaching preschool, GG moved out, and I ran out of excuses for not having a dog.  Taylor had been begging for a dog for couple of years, Spencer was on his side, and before I knew what had happened, we had Abby.  That makes it sound like I didn't want her.  I will be honest:  I did not want a dog.  But when I could see I was beaten, I went looking at dogs with the family, and I really did want Abby.  She was a sweet dog.

Abby was fiercely protective of our family, so guests in our house were not treated very well by Abby.  But she was wonderful with us.  She was smart and obedient.  Eight months after we got her, Abby got suddenly ill.  Within days she was retaining huge amounts of water and she could hardly walk.  We knew the humane thing to do was to put her down.  So one evening we told the kids, and they cried and cried and cried.  They hugged and loved on Abby.

The next day Spencer sent me an email that simply said, "Today.  1:00."  I called him to see if he was OK, and he wasn't.  So I left work to be with my family, whose hearts were breaking.  The kids got home from school just as we were leaving the house, so we had waterworks again before we left.  And again when we came home, of course.

At the vet they told us that they would give Abby a dose of a sedative, then when she was very calm they would give her the euthanizing shot.  They told us we could stay with her or wait in the waiting room.  You guys, I could not leave her.  I just felt like I was totally abandoning her, and she would know it, so I couldn't leave.  The problems came with the sedative.  Because she was retaining so much water, they had to sedate her three different times, and it never did really do what it was supposed to do.  By the time the third sedative started to kick in, she was still trying to walk around, and she was upset, but she lost bowel control and her legs would buckle.  It was the saddest thing I have ever seen, and I wanted to yell, "Just put her out of her misery!  You're making it worse by trying to make it better!"

Finally they decided that even though she wasn't as sedated as they'd like, they would give her the euthanizing shot.  The whole thing was a terrible experience, except for the moment when she passed.  It was fast and sweet.  They then sweetly closed her eyes and positioned her body in a quiet sleeping position, and we got to spend some personal time with her little body.  We cried and cried and cried.  We cried all the way home.  Then we cried some more.

Well, you guessed it, two days later, Taylor tearfully asked if we could get another dog.  Spencer did his normal shopping thing, and within another week we had Bella.

Bella is the exact opposite of Abby:  Bella is all white, Abby was all black.  Bella loves to play, Abby didn't care about it.  Bella is a doofus, Abby was brilliant.  Bella eats like a pig and will eat anything put in front of her, Abby had more discriminating tastes.  Abby was all business, Bella is fun and games.  Abby didn't like anyone but us, Bella loves anyone and everyone--especiallyBut Bella has been a love, right from the beginning.  Whoever lost her was sad, I'm sure, but she has been a blessing to us.

When we first got her I told our family, "This dog better live for 10 years, at least till Landon is on his mission.  Because if anything happens to her, my heart will be broken, and I don't know if I can do it again."

You can see what's coming, right?

For the past couple of weeks Bella has not been 100% herself.  She's not been eating well.  Sometimes she'd look drunk while she was walking.  She hasn't had the energy to run and play.  June and December are when we give her a de-worming medication, so we did that, hoping that that was going to help her.

When I was coming home from work last night, I called Spencer, and he said that he was going to take her to the vet first thing in the morning.  But about an hour after I got home, Bella went completely berserk.  She started yiping like she was afraid.  She'd try to run, but she fell down.  She'd turn in circles, and she acted like she couldn't even see or hear us.  We scooped her up, and within minutes we were at the veterinary hospital.

The doctor did a preliminary check and couldn't find anything noticably wrong.  He was baffled by what we told him had happened.  And then it happened again.  We all just stood and watched her as she went a little nuts and calmed down about a minute later.  It happened twice more while we were there.  The doc did an ultrasound and found nothing, so he told us she probably had a neurological issue of some kind.  Then they did some blood work, and they found that her blood sugar level was quite low.  He thought that Bella might have an insulin-secreting tumor on her pancreas.  If it's small we might be able to treat her with prednisone for a while.  We can have surgery to remove the tumor, but often there are micro-tumors that just grow anyway.

So really?  The writing is on the wall.  There is a very good possibility that in the near future we will have to do the kind thing for Bella and have her put to sleep.

And once again, my heart is breaking.  The truth is that I love our dog.  Even more, though, I hate that the hearts of my family are breaking.  This dog was supposed to live till everyone was an adult.  How do I tell Briana that her sweet Bella is dying?  And if we have to put her down, do we do it before or after Taylor leaves?  Ugh. 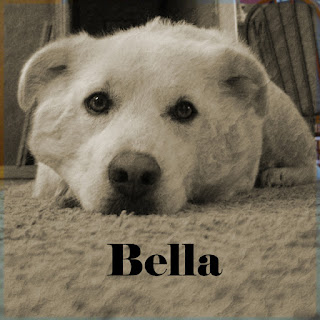 Oh Aundrea my heart breaks for you. What a hard situation. It is a hard thing to loose an animal who has become so much apart of your family. I know how hard it is. I hope and pray you can find comfort during this hard time.