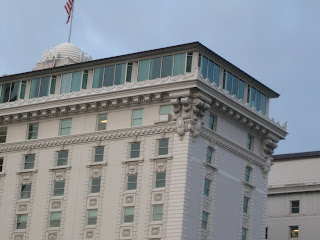 This is the Joseph Smith Memorial Building in Salt Lake City. If you look carefully you will see a small box near the top corner of the building, right next to the corbels (sp?). You don't know what a corbel is? It's that little decorative thingie at the top of the building--duh! Anyway, that little box was the home of our falcons last year (and the year before that, and the year before that, etc.). Jesse was their Mama, and he helped get the box set up when he was the FM of that building. Even better, Jesse helped get the camera set up so that everyone in the world can watch the falcons lay their eggs, hatch, and fly away. If you look closely you will also see that the falcons' home has been condemned and closed off. I do not know why. 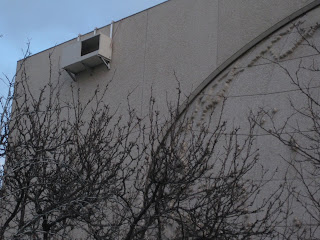 This is the west wing of the Church Office Building. This is the falcons' new home. And yes, there is a camera there, too. I will keep you posted when and if a pair of peregrines decide to make it home for their nest.

We're still getting occasional snow, and it's still pretty cold. But it is spring in SLC!