Journey to the Awesome 80's

One of Spencer's colleagues was deciding whether or not to come in to work on Friday because she was going to be up late at the Night Ranger/Foreigner/Journey concert.  Spencer gasped and said, "Lucky!"

Later she called him, said she had two extra tickets, and asked if he wanted them.  He jumped all over that.

This is where I admit that I'm a dweeb and an old woman, and it did not sound terribly fun to me to go to a super-loud concert with a bunch of 80's stoners.  But Spencer was so excited, so I agreed to go.  I also grabbed a pair of ear plugs.

Our seats were on the east side of the stadium.  We saw the very last of Night Ranger, and danged if it wasn't all kinds of fun.  Foreigner was really, really good (even though there are only a few of their songs that I like).  Journey was sans Steve Perry (bummer!) but their lead singer sounded like Steve.  I couldn't watch him, though--he was obnoxious, though very energetic.  He probably also makes really good zucchini bread.

Yes, I wore the earplugs.  Yes, I danced and sang.  Yes, we were surrounded by 80's rockers and stoners.

It was so dang much fun! 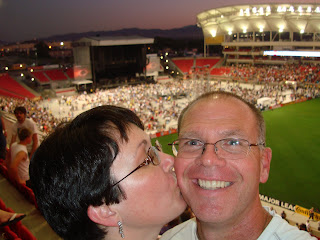 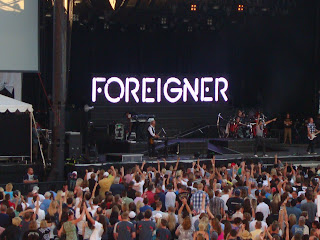 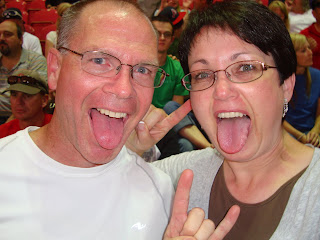 Labels: Concerts, I never could pull off the rocker look