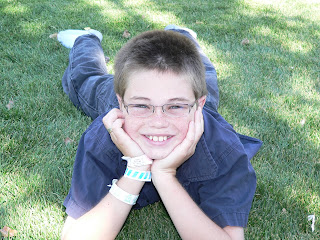 This is our youngest son, Landon Spencer Hill. There are several things I'd like for you to notice about this boy.

HIS SMILE--Landon has been smiling almost from the time he was born. He is an amazingly happy young man. He had to have his eye teeth removed about 8 months ago, as we strive to get his teeth to grow where they need to grow. He keeps hoping that the next time we visit with the orthodontist it will be time to go into braces, but those darned teeth just won't grow back! (One of them finally broke the gum line a couple of weeks ago). We have always laughed because when he smiles, his eyes nearly disappear. Which brings me to...

HIS CHEEKS--Landon has not one ounce of fat anywhere on his body, but he still has round cheeks. He hates them, but the girls and I agree that they are one of his most lovable features. Besides being very cute, they are wonderful for kissing; and lucky me! he lets me kiss them. He likes me to give him "1,000 kisses," which means that I either kiss them really fast for a long, long time or I do a funny-sounding pucker on his cheeks. Either of these can last for up to a minute, and he loves it. Let's be honest--I love it more!

THE WRISTBANDS HE IS WEARING--Every time he does anything that requires a wristband, he has to keep it till it's so nasty I insist he take it off. But saving stuff is very cool to him. His middle name could be Packrat. (You can see he did several fun things this past summer, when this picture was taken.)

HIS SENSE OF FUN--One of the reasons I love this picture is that it is SOOO Landon. This kid loves to play and tease and laugh. Of course, this most lovable characteristic is also one of his most annoying characteristics, depending on the context.

Landon has been fun for all of his life. Because he's 2 1/2 years younger than Ashtyn, he is kind of a family of his own sometimes. But we've all enjoyed this littlest brother (sometimes more than others). That said, one of the most wonderful things of all is to see him growing and maturing in wonderful ways. He watches his siblings closely, especially Taylor. His prayers are sweet and thoughtful. He has no inhibitions about asking questions and telling us everything.

Take today, for example. He called me from school to let me know that earlier this week, when "the lady" came to their school to discuss behavior, they decided that there should be quiet times. "I got into a little trouble today, Mom," he said. He proceeded to tell me that Wes had been talking to him, so he wasn't being quiet. He got three warnings and had to be sent out to the hall. In the hall he finished his paper that he was supposed to work on, and now he was calling me to tell me what was going on (part of the consequence to his behavior). Seriously, how do you respond to that? I asked him what he was going to do about this. He responded that he was going to move farther away from Wes so he could keep his voice under control. I told him that was good, but I thought he owed Mr. Loertscher an apology. Matter-of-factly, he agreed. I then told him that I loved him, and he hung up.

What am I going to do with this boy?

What would I ever do without this boy?