When I came down to the 10th floor, there was a fabulous picture of the Oakland Temple by night, overlooking the Bay.  The picture we have is even more beautiful-ER than this picture: 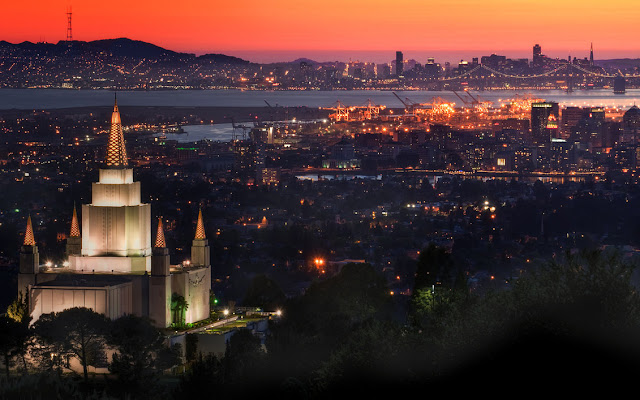 That is the temple where Spencer and I were married.  So I immediately emailed the space manager and asked him if we could not only leave the picture on the floor, but move it to the adjacent wall so I could see it all day.

His director wanted to take the picture with him.  I don't know if they're going to order one for his floor, but this one stayed, and it got moved.  I'd love to say it was just for me, but I'm not quite that important.  At any rate, it's here, right across from my desk.

I'm so glad I got to keep that picture!  Otherwise how would I know these important things?

I was not married there but I still wouldn't mind looking at that picture everyday. Beautiful! I have "my temple" (bountiful) as my wallpaper and every time I think "I should change that to something new" I can't bring myself to do it. I love to see it every time I turn on the computer!

That is a beautiful picture. I'm actually going to that temple for the first time in June. My soon to be bro-in-law is getting married there a week after Brad and I. I'll have to tell you all about it when I do...:)