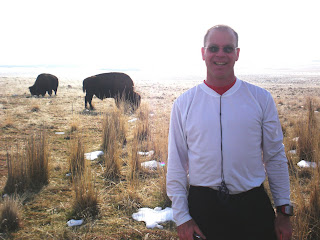 This is a picture of my sweetheart, Spencer. This particular picture was taken just last month as he ran 16 miles on Antelope Island. Yeah. SIXTEEN miles. He is in training for the Salt Lake City Marathon in April. He is a student at the University of Phoenix (with only 9 more credits to earn for his bachelor's degree!). He is the Scout committee chairman, the Scout award-tracking specialist, the Deacons Quorum advisor, and a member of the stake youth conference committee. He works full time for Boeing as the Traffic Focal. All of those things tell you a lot about Spencer, but they don't even begin to tell you about how wonderful he is.

Spencer has never, ever left me alone in any way. Even when what I needed was for him to change a bad diaper. Or when someone threw up. Or when paint spilled on the new floor and I called him at work all hysterical. In spite of the person he married, he just jumps in and gets it done. He even left work to take care of a paint-covered floor. He's also really good at holding me when I need to be held, and what could be better than that?

Spencer is a fantastic listener. Anyone married to me would have to be. The thing is, he likes it. At least he has convinced me that he does. With as much as I talk, that could be a full-time job.

Spencer is about as great a dad as anyone could ever hope to have. He is really good at balancing work and play. He is very patient. He is very calm. I wish you could have seen him trying to calm a screaming Briana (just a few months old) by telling her about the Stripling Warriors, found in the book of Helaman. Just as he reached that point she let out a huge wail. He responded, "You're right. It's not in Helaman. It's in Alma." That's just the kind of guy he is.

Spencer has the ability to get along with anyone. Again, I use Exhibit "A" (aka "Aundrea") to make my point. Seriously, how many of you would want to be married to me? I rest my case. He really can get along with anyone. To go back to the world of high school, Spencer got along with jocks, stoners, rockers, cowboys, and everyone in between. This amazing talent makes him a favorite among ward members, neighbors, family, and co-workers. He's just great that way.

I LOVE YOU, BABE!

Sorry to disappoint, but I think you just blogged about MY husband, Tayler! He is all those things! He was always the guy that everyone got along with and loved. Still is. Crazy... I hope he somewhat resembles that person at work, but who knows with the stress of it all.

Seriously though, Spencer sounds great. Hopefully I will get to meet both of you at your next date night. OR maybe we should host next time.