Remember when Landon went to CHHS's prom and had a horrible time?  Remember how he cried all the way home and didn't sleep that night?  And remember how it took him till Sunday afternoon to be able to talk about any of it?

So he did.  And Monday Asch went and bought a dress, so Tuesday Asch and Landon went to buy him a tie.  And he bought some cuff links and buttons.  And a corsage.

So Saturday they went to Subway for lunch (with her parents, who were driving).  They bowled a couple of games at the bowling alley.  He came home and had a nap.  Aschley and her parents came over, the kids exchanged flowers, and the parents took pictures.  Landon and Asch took Jessie-the-Magic-Car (with Aschley driving) downtown.  They had dinner at the JSMB, where Aschley announced--after being complimented a couple of times while she was in the restroom--that "Mormons are so nice!"  They went to the State Capital building, had pictures taken, and danced, danced, daaaaaanced  ALL NIGHT.  They got home a little before midnight, tired and sweaty and all smiles.

So Landon had a fabulous Prom experience and announced on Sunday morning, "I'm definitely doing that again.  It was a lot of fun!" 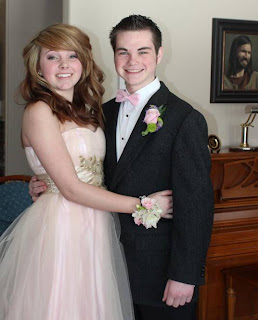 oh cute. i'm so glad he gave it another try and had a fun experience.