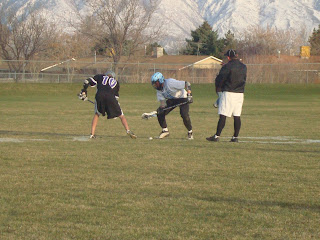 Taylor has been playing lacrosse for several years now. He loves it. During lax season he is often one running bruise. He also falls into bed at night. But everything revolves around lacrosse. Since his coaches are (usually) gentlemen and they teach respect for the game, their team members, and the other teams, we encourage him to be involved.

This is a pic of T on the faceoff. He's facing us, in the light blue helmet. He's fast enough on the faceoff that at this particular game he had the other kid jumping the gun (illegal procedure).
His stick is his constant companion at this time of year. I think he might have named "her" once, but I can't remember what the name was.

BTW, if you want to watch a fun sporting event, men's lacrosse is your game.