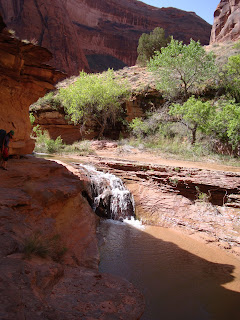 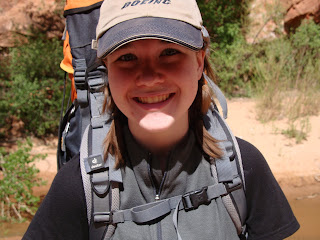 Ashtyn spent the past week on a backpacking trip with her classmates. They went to Coyote Gulch (isn't it lovely?). I think they said they hiked 15 miles over three days. They found spots to camp, carried in all their food, carried out all their garbage, and had a fun time. Ashie says she lived on tortillas, beans, peanut butter, rice, and oatmeal. She was glad to come home and eat a real meal. (Spencer says he could live on that stuff every day for a year.) She was also glad to come to her bed.
We got an update via a satellite phone once during the trip. It included latitudinal and longitudinal coordinates. That was cool.
At one camping area they found a permanent toilet structure built sort of in the middle of nowhere. There were wood chips to place in the toilet after using it, and they happened to be cedar chips, so there was little smell. The girls declared it a 4-star perma-potty!
Ash is currently working on getting ready for a 20-mile bike ride with her class to raise money for the Huntsman Cancer Institute. Pledges, anyone?
BTW, every once in a great while I see myself in one of our children (physically). This picture of Ashtyn is one of those times. Apparently I wasn't dreaming that I had something to do with the physical creation of our children. :)

If you look at this pic. of Ashie then look at the aboved pic. of Spencer they look just alike!

She's beautiful! And I must say I'm not the least surprised that she could declare a (probably) very rough restroom facility 4-stars and be happy with it, wood chips and all. It probably makes great zucchini bread too.

Lucky for Spence it's the end of the world, and most people have that stuff in their food storage (right?) so he just might get the chance to live off it for a year. [shudder]. If so, Ash is invited to my house for the chocolate, Sun Chips and potatoes that dominate my "food storage".

She definitely has some of her mom in her! What a darling girl!